The Edward Worth Library

Dr Edward Worth (1676-1733) was one of the first Trustees of Dr Steevens’ Hospital. The son of John Worth (1648-1688), Dean of St. Patrick’s Cathedral, Dublin, Edward had been educated at Merton College, Oxford and the University of Leiden, before returning to Dublin to set up a medical practice at Werburgh’s Street. His practice appears to have been a lucrative one, allowing him to amass a collection of nearly 4,400 books, which he bequeathed to the newly-founded Dr Steevens’ Hospital. We see him in this portrait holding one of the many fine books in the Worth Library. A connoisseur collector of fine volumes, Worth was primarily interested in medicine and science, thus ensuring that the Edward Worth Library today is a wonderful resource for all historians interested in the history of medicine and science in the early modern period, as well as the history of the book. For more details about our collections, please see our website: www.edwardworthlibrary.ie

Edward Worth not only left his books to the fledgling new hospital, he also made provisions for the bookcases which adorn the Worth Library today: £50 was to be  paid for the ‘fitting and preparing the room with shelves and other conveniencys for the reception of the said books’. A receipt of 1737 from the carpenter Hugh Wilson refers to the bookcases, and states that the Corinthian entablature cost £23 and 10 pence. From this is it clear that there was some delay between the acquisition of the books by the Governors of Dr Steevens’ (May 1733) and their eventual setting in place. This was partly due to the need to put the books in order – a task given an un-named ‘learned deserving person.’ Once Dr Worth’s cousin, Edward Worth of Rathfarnham (1672–1741), was elected a Governor in March 1734, matters proceeded more speedily and it is clear that by 1735 work had begun on the construction of the room.

Bookshelves open at the Worth Library.

While the design of the room has generally been accredited to Sir Edward Lovett Pearce (d.1733), this, as Casey (2005) noted, seems unlikely. We are on firmer ground with the Governors’ accounts which inform us that Hugh Wilson was paid £81 and 11½ pence for his work on the Worth Library: this included not only the aforementioned entablature which ran all around the room but also Corinthian columns on either side of the mantelpiece as well as the wainscoting of the shelves themselves. Francis Godfrey, the glazier, was responsible for the crown glass in the unusual glass-fronted bookcases, which, as the following receipt makes clear, were paid for by Edward Worth of Rathfarnham. The latter was also responsible for the gift of the portrait of his cousin which now hangs over the chimneypiece of Kilkenny marble. The accounts also tell us that on 17 September 1742 the Governors ordered that ‘the panelling of the west side of the Library be taken and converted into presses for the classing of the books’. This was necessary because Edward Worth of Rathfarnham had decided to leave some of his uncle John Worth’s books to the Worth Library (books which had previously belonged to John’s son Dr Worth) and these came to the Worth Library following Edward Worth of Rathfarnham’s death in 1741. Following that date, little changed in the Worth Library and, as Kirkpatrick noted in 1924, ‘much of the old curved glass is still to be seen in the press doors.’ 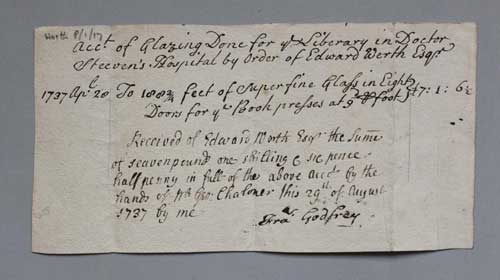