That Richard Steevens’ plan for a hospital for the curable poor of Dublin came to fruition was largely due to the outstanding efforts of his indefatigable twin sister Grizelda, who drew together not only the Trustees named in her brother’s will but also leading figures of Dublin society to fund raise for the planned hospital. Despite many vicissitudes the hospital opened its doors in July 1733, with the express intention of treating ‘Forty Sick Persons’.

Broadsheet of ‘The Present State of Doctor Steevens’s Hospital, January 1735’.

This broadsheet, issued by the Clerk of the hospital, Michael Wills, on 10 January 1735, makes clear that Grizelda’s ambitions did not stop there. The broadsheet outlines the planned development of the hospital: now the target was to provide beds for ‘300 Sick Persons’, a plan largely dependent on ‘such Persons as are disposed to promote so charitable a Work’. For the sum of 200£ Sterl. or ten Pounds per Ann.’, Grizelda and her Trustees offered benefactors a unique opportunity: ‘That each Bed, so numbred and endowed, shall have the respective Benefactor’s Name affixed to it; And that such Benefactor his Heirs and Assigns for ever shall have a Right, from Time to Time, to recommend to their respective vacant Bed; provided the Patients recommended be within the Laws and Rules of the Hospital.’ Grizelda and her Trustees resorted to this stratagem because they were very well aware of the all accompanying charges of keeping a patient in hospital: ‘Bedding, Diet, Attendance, Medicines, Nurse-keeper, Coals, Candles and Washing.’ Their broadsheet even attempted an early version of ‘crowd-funding’ by suggesting that ‘because there are many Persons very charitably disposed who are not able to lay out the Sum of 200£ it is farther proposed that two, three or four Persons joining may endow one Bed, whereby Each of them, their Heirs and Assigns, may have two, three, or four Turns of Recommendation in one Year, and so on for ever.’ A practice which would surely have made the administration of the hospital a nightmare for those in charge!

Richard Steevens’ decision in 1710 to leave money for the foundation of a hospital for the poor of Dublin was an important one not only because it led to the foundation of the hospital which bears his name but also because it encouraged others to attempt similar schemes. As Kelly (1999) points out, Dr Steevens’ Hospital, though it was the first of its kind to be planned in Dublin, was one of three voluntary hospitals by 1734. In 1718 six Dublin surgeons (probably influenced by the Steevens’ plan), came together to open a hospital on Cook Street to care for the ‘maim’d and wound’d poor’. This hospital, called the Charitable Infirmary, was joined in 1733 by the opening of Dr Steevens Hospital ‘for the curable poor’ and in 1734 by Mercer’s Hospital, whose focus was on the mentally and dangerously ill. By 1757 four more would be added: the hospitals for Incurables, the Lying-in Hospital, the Meath and St Patrick’s. All these hospitals had two things in common: they were led by dynamic medical professionals and were funded by private charity. It was not until the nineteenth century that state subvention of the voluntary hospital system was introduced. 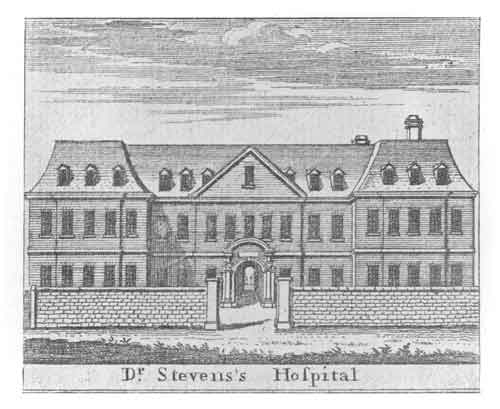 Detail of Dr Steevens’ Hospital from Brooking’s 1728 map of Dublin.