ORDERED that an Advertisement in Mr Faulkners Journal and in Mr Jones’ evening post to give notice that the Governours will meet at the Hospital on Mond: the 23rd instant, in order to receive sick, and that it be inserted in the said Advertisement that the persons who desire to be admitted to present themselves at the Hospital every Monday and Fryd; between the hours of Eleven and one, that the produce Certificates of their Poverty signed by one or more of the Governours, or by the Ministers and Church Wardens of the Parishes to which they belong, and the Distempers they shall labour under be neither Venereal nor Infectious nor such as shall be Judg’d Incurable.
ORDERED that one thousand of the sd Advertisements be printed in handbills to be posted, and Dispersed through the City.
ORDERED that one thousand bills for admitting the sick, and another thousand for Dismissing them be Immediately printed.
ORDERED that Mr George Grierson be printer to the Corporation.

Ordered at a Meeting of the Governours of Doctor Steevens’ Hospital held on Thursday 10 July 1733.* 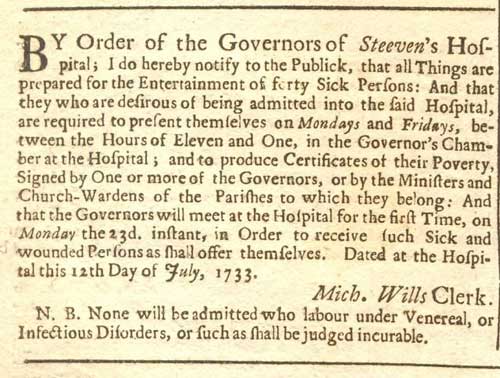 The stated function of Dr Steevens’ Hospital, when it opened in 1733, was to care for the curable poor of Dublin and, as the above notice amply demonstrates, the Governors of the Hospital were keen to exclude any cases which fell outside these parameters. Kirkpatrick’s notes on the archives of Dr Steevens’ provide us with a synopsis not only of the some of the people who were cared for in the four wards (two male and two female) during this early period, but also of the types of conditions being treated. For example, in 1737 James Carson was admitted on 19 February with an ulcer on his leg and was discharged cured by 18 March – as was Thomas Renison. Female patients suffered from a range of complaints, being described as ‘Paralytick; Obstructed; Asthma; Consumptive; Rheumat; Rheumat; Diarrhoe; Ague; Rheumat; Rheumat.’ Kirkpatrick’s accompanying listing of patients admitted for 1733-34 provides us with dates of admittance, patient number, name, parish, as well as notes on whether they were deemed incurable or whether they died. The inclusion of their parish names refers to the notice above – i.e. patients had to be vouched for by either one of the hospital Governors or their local clergymen. 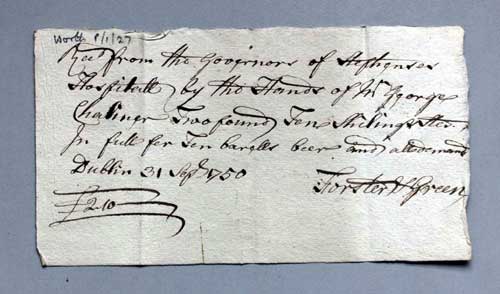 This receipt for beer reminds us of the dangers of drinking water in the eighteenth century. That beer continued to be a staple of the diet at Dr Steevens’ Hospital (and other hospitals), can be seen in Kirkpatrick’s (1924) notes on the new diet adopted fifty years later, in 1800, which stipulated that patients were to be given either one pint milk or beer to drink for breakfast and supper. The same diet suggested ‘1 quart of stirabout made of 5 oz. of oatmeal, or 4 oz of oatmeal and 1 oz of Indian meal’ and the same at supper with dinner consisting of soup and a half pound of bread. The only change to this bland died was on Wednesdays and Fridays when the dinner consisted of gruel. These measures were, of course, dependent on the cost of foodstuffs and at times the stirabout could be replaced by bread if the price of oatmeal was deemed too expensive.

The Governors were aware that patients not only needed doctors and nurses and their daily diet: they also needed correct medicines. With this in mind in 1747 they decided to employ an apothecary (a Mr Boland), as a member of staff in the hospital, arguing that it would be cost saving to have a resident apothecary:

Pursuant of a direction of this Board to the Visitors and Doctor Steevens on the 11 of July last we have considered the Article of Medicines annually made use of in this Hospital and have looked into the expense which the hospital has been at on this account since the opening of it together with the savings which may be made in this account. Andwe are of the opinion that the medicines to be made use of for the time to come may be had better and at less expense to the oecomony if a skillfull Apothecary be provided to reside in the Hospital, whose whole business it shall be under the direction of the Visitors to buy prepare keep and dispense all manner of medicines simples and compounds to be made use of in this Hospital. And therefore pursuant to the same directions we have enquired for found and agreed with a proper person (provided the same be approved of by this Board) who shall constantly reside in the Hospital as an officer or servant of the same. Whose duty shall be to prepare make and dispense all manner of medicines to be used in the Hospital and distribute them to the patients pursuant to the orders of the Physician and Surgeon. He shall be required to lay before the Visitors a list of such medicines as from time to time are wanted in the Hospital with the manner in which they are to be best had and the prices of each particular sort and kind. He is to have the sole charge and keeping of all manner of medicines and to be accountable for them to the Visitors quarterly.*

The Board Minutes of the Governors unsurprisingly focus on issues of governance and management of the hospital. They were keen to make sure that not only doctors and nurses were professional in their dealings with patients but also that patients did not transgress the rules of the hospital. As the decision of the Committee of 8 October 1799 reminds us, one area of concern was fraternization of the sexes:

The rules and regulations which point out the duty of the Matron should be particularly enforced, the ward rooms should be locked at nine o’clock every night to prevent improper intercourse between the patients, particular orders printed along with the dietary and notice before mentioned should be hung up in each ward to prevent the Nurses taking money from patients or their friends.

As the centuries progressed, new groups of patients came to be treated at the hospital. Though primarily a general hospital, Dr Steevens’ Hospital could and did respond when there were significant epidemics – as we can see in the ‘Fever’ page of this web exhibition when, in 1817, large numbers of typhus sufferers were treated there. Equally, though there had been an early prohibition on patients afflicted with venereal disease, these too came to form a distinct group of patients being treated within the hospital. In some cases new patient groups were not classified by disease but by their occupation: in the mid nineteenth century, for example, in 1803 a decision was taken to admit members of the army following a petition from the army commissioners and  a number of wards were designated as army wards, not only around the time of the Napoleonic wars, but also in the 1890s when the Royal Infirmary had to be temporarily closed. Following the agreement of 1803 the upper story of the hospital, with a capacity of 200 patients, was set aside to accommodate the army, with the proviso that the army commissioners ‘fit up with proper furniture and make habitable so many of those wards as they may want at the expense of the Government, and pay such sum to Steevens’ Hospital for rent as the Governors of that institution shall think reasonable.’ Though this was initially regarded as a temporary arrangement to last no more than two years, it actually continued for a further eleven and as a result many soldiers from the Peninsula War were treated in Dr Steevens’.

Needless to say, during World War I the hospital again set aside beds for wounded soldiers and Kirkpatrick (1924) states, between 27 December 1914 and 27 March 1919 ‘one thousand two hundred and ninety-seven sick and wounded soldiers were treated in the hospital.’ In conjunction with these army wards a rather unusual practice had developed from the 1860s onwards when Colonel Fielding, a staff officer of the Dublin Garrison, requested the Governors to set aside one bed in the hospital for the use of wives and children of soldiers stationed in the city. In time the military authorities demanded more beds for this purpose and by 1888 two wards were set aside for this purpose: one was a newly created maternity ward (1889) and the other was a general medical and surgical ward. The maternity ward lasted until 1913 when it was re-designated as a gynaecological ward

Equally, following a similar request from the Royal Irish Constabulary in 1843 a ward was set aside for them. Unlike the deal with the army (who covered the costs of setting up the army wards) and the Fever wards of 1817-1819 (the costs of which were covered by the government), the financial underpinning of the Royal Irish Constabulary wards was considerably less attractive to the Governors: the policemen were asked to pay ten pence a day, a sum which did not meet the costs of their care, leaving the hard-pressed hospital to supplement the different. This wasn’t the only aspect of the Royal Irish Constabulary wards which proved a headache for the hospital authorities: judging by the Board Minutes, these patients provided the Governors with a number of challenges, not only because they were admitted by their own constabulary doctor for sometimes very minor complaints, but also because of their propensity for smoking in the wards.