‘The great advantage arising out of the connexion of an elementary school with a hospital, situated within its precincts, which is preferable, or in its immediate neighbourhood, and of which the medical and surgical officers of the latter are the teachers, is, that the students have thereby the opportunity of witnessing the lessons they have been taught, and the principles they have heard laid down, practically illustrated and brought to the test of their own observation and criticism, capability of employing which, as is well known to those connected with hospitals frequented by students, they very speedily acquire.’

This quotation, from John Flint South’s ‘Plan for the Establishment of a Complete School of Medicine and Surgery in Steevens’ Hospital’, which is appended to the Report of the Commissioners appointed to inquire into the Hospitals of Dublin (Dublin, 1856), provides the rational for the Commissioners’ aim in setting up a medical school at Dr Steevens’ Hospital in the mid nineteenth century. As the diary of Robert Thompson, mentioned in the Students webpage, makes clear, there had been teaching at Dr Steevens’ Hospital prior to this plan to set up a formal medical school there. Walter Harris, writing in 1766, noted that ‘before any extraordinary operation is to be performed’ the resident surgeon at Dr Steevens’ frequently gave ‘notice to the gentlemen of the faculty, which greatly tends to the instruction of the youth of the City of Dublin, that are intended for that branch of medicine’. We know that in the 1750s Samuel Clossy had studied pathological anatomy under William Stephens and famous surgeons such as Abraham Colles had taken on apprentices in the early nineteenth century. The fame of the surgical staff at Dr Steevens’ ensured that in the later eighteenth and early nineteenth century the teaching primarily focused on surgical instruction but in 1800 John Crampton (the author of the Fever report at Dr Steevens’ Hospital) was permitted to teach medicine to the students of the TCD School of Physic.

What South (1797–1882) had in mind was something far more formalised and extensive that these rather ad hoc arrangements. In a lengthy appendix to the 1856 report he in effect delivered a blue-print for a new Medical School at Dr Steevens – a blue print which was later put into practice with very little deviation from his original plan. South suggested the following subjects should be taught:
As regards the institution of the Lectureships in the Elementary School, they must be correspondent with the subjects of medical education required by the governing authorities of the profession, and consist of:

In the new medical school all these subjects were included – though a ninth professor was instituted when the Governors decided to have separate chairs for Material Medica and Botany. Of these nine professors, three came from the staff of Dr Steevens: Henry Freke and William Malachi Burke taught Medicine; William Colles and Samuel George Wilmot lectured in Surgery and Samuel A Cusack was appointed as Professor of Anatomy and Physiology.

As Kirkpatrick (1924), recounts, the curriculum proved to be a challenging one for students:

The dissecting room opened at seven o’clock in the morning, and remained open till eight o’clock in the evening. The hospital visit started in the morning at eight o’clock, and at nine o’clock there was a clinical lecture, or on Thursday operations. At ten o’clock Mr Hamilton lectured on descriptive anatomy, and at eleven, on alternate days, there were lectures on medicine and surgery. At twelve o’clock Mr Cusack lectured on anatomy and physiology, and at one o’clock, on alternate days, there were lectures on chemistry or materia medica. Mr Hardy lectured on midwifery at four o’clock. In addition to these lectures, the pupils were given the privilege of attending the practice of Swift’s Hospital; and Mr Cusack gave a course of lectures on ophthalmic surgery to comply with the requirements of the Army Board.

South had written in his report that he and his fellow commissioners had ‘reason to believe that the Governors of this Institution are alive to the importance of this subject, and are not indisposed to second our views’. The enthusiasm of the governors was not only because they could see the merits of the plan for Dr Steevens’ Hospital but may also have been due to their recognition that an increase of their parliamentary grant depended on their ready acceptance of the plan. South and his colleagues were well aware that such a medical school not only required teachers and students and formal rules of study but also demanded an initial financial outlay in terms of building the requisite lecture rooms:

In regard of the buildings it is necessary that there should be a lecture theatre, having connected with it a museum, laboratory, and dissecting-room, which should be so situated and built as to be capable of enlargement, corresponding to the size of the class, and the increase of the collection. Now, as the Governors are the electors of the physicians and surgeons of their hospital, and also of the teachers in their school – the former being called on to lecture there, and there only, and in future taking office with that understanding – the necessary buildings ought to be provided out of the hospital funds, and remain hospital property, as should be also all the collections in botany, materia medica, mineralogy, normal and pathological anatomy, human and comparative, by whomsoever given or purchased for the museums.

South also pointed to the need to increase the teaching staff so that there would be sufficient expertise on the premises:

To render the hospital staff, as forming part of the school, complete, it will be necessary to increase it by the appointment of a physician-accoucheur, who should be also lecturer on midwifery, and to whom a few beds in the hospital should be allotted for the treatment of some of the more important female complaints. He should also have to take charge of the whole midwifery department, which will consist entirely of out-door patients, furnishing cases to those students who, having attended the midwifery lectures, and proved by examination their knowledge of its principles, shall be intrusted with the delivery of the patients, accompanied for the first few times by an advanced student in this branch of the profession, and afterwards attending alone, or in company with a junior student; and, if requiring assistance, calling in the aid of the resident accoucheur on duty.

Much of this was in line with the prevailing practice in England and South was keen to use London models for the new medical school in Dublin.

In line with this, South argued for the introduction of an annual scholarship of between £10 and £20 which was designed to be awarded to whichever of the students should achieve the highest marks in matriculations examinations in classics and mathematics. South suggested this because he argued that this practice had been found to be beneficial ‘for several years past in some of the London schools’. In an effort to encourage good behaviour among the students, he further suggested that they themselves might be encouraged to elect a student to receive a prize for ‘good conduct and gentlemanly bearing’. These were not the only prizes available to students at Dr Steevens: following the death in 1861 of James William Cusack (1788–1861), one of the most notable successors of Colles, his son Henry Cusack instituted the Cusack medal prize in honour of his father. As Andrews (2004) relates, James William Cusack, in conjunction with Abraham Colles ‘helped to establish Steevens’ as the leading hospital for surgery in Ireland, commanded a large practice, and became the ‘chief’ of Irish surgeons, particularly in the field of lithotomy, and contributed to the high reputation of the Dublin school of medicine.’

Kirkpatrick (1924) recounts that these medals continued to be presented until 1875. Their discontinuance may have been related to the vicissitudes faced by the Medical School in the later 1870s. The lack of engagement of Henry Freke with his teaching caused the normally acquiescent student body to report him to the governors. Initially Freke’s resignation from his post seemed to have solved the problem, coupled as it was with the emergence of rising stars such as Robert McDonnell and Richard Bookey but when the latter charismatic teacher died at the age of 35 in 1880, dissension about the choice of his successor eventually led to the closure of the school in 1880. As Kirkpatrick (1924) notes, the decision of the governors to close the school was a strange one for the school had proved, in its short existence, to be a great success with between 69 and 90 students attending the winter sessions per year. 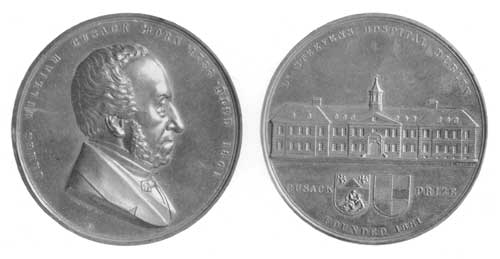 Photograph of the Cusack medal (from Kirkpatrick’s History).