‘While I was endeavouring to trace such causes of diseases, as can be discovered by dissection, in St. George’s hospital in London, and Stevens’s hospital in Dublin, by the invitation and permission of the late Dr. Stevens, in the years 1752, 1753, 1754, 1755, 1756, and keeping an exact register thereof, together their antecedents at the time, with such reflections as the phenomena seemed to me to suggest, I thought I observed some things lightly passed over by authors, and others where their experience was defective.’

Samuel Clossy, Observations on some of the Diseases of the Parts of the
Human Body (London, 1763), p. vii. 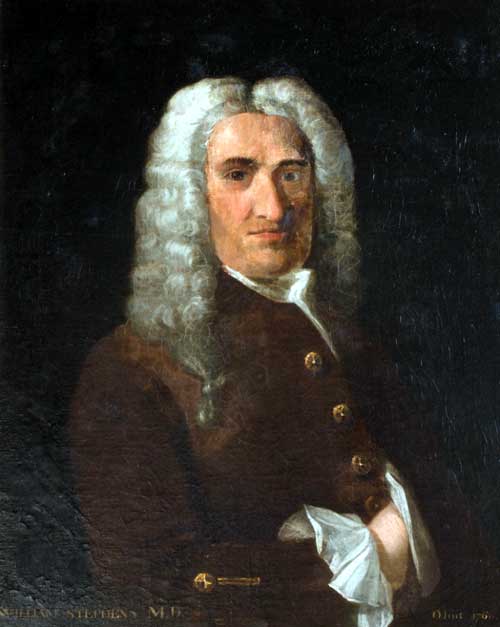 The ‘Dr. Stevens’ referred to in the above quotation was not Richard Steevens, who died long before Clossy’s arrival at the hospital, but William Stephens (d. 1760) (no relation of the founders, Richard and Grizelda Steevens). Stephens, a Governor of Dr Steevens’ Hospital, had, like his colleague Edward Worth, received his medical education at Leiden, where he had come under the influence of the renowned medical teacher Hermann Boerhaave who sponsored Stephens’ MD thesis ‘De Elixir Proprietatis’ in 1718. In the same year Stephens followed in the footsteps of Worth by becoming a Fellow of the Royal Society and, like Worth, he would later serve as President of the Royal College of Physicians of Ireland (1733, 1742 and 1759).

In 1725 Stephens played a fundamental part in setting up a physic garden at Trinity College Dublin. At roughly the same time (c.1724-25) he began lecturing in botany and published the results of his botanical lectures in 1727 under the title: Botanical Elements: for the Use of the Botany School in the University of Dublin (a copy of which may be found in the Worth Library). By 1733 Stephens was appointed lecturer in chemistry in TCD. His first official contact with Dr Steevens’ Hospital came ten years later, in April 1743, when he was elected as a Governor. By 1749 he was acting Physician in the absence of Francis Le Hunte and in 1750 he was officially appointed to succeed Le Hunte as ‘Physician’ to the hospital.

Perhaps one of William Stephens’ most important acts in relation to Dr Steevens’ Hospital came two years later when he invited Samuel Clossy (c.1724-1786) to study morbid anatomy at Dr Steevens’ Hospital. Stephens had already been instrumental in sponsoring Clossy’s entrance into Trinity College Dublin in 1739. Clossy’s delayed graduation (as MB in 1751) was by no means an indication of any lack of aptitude – as Coakley (2014) relates, Clossy was ‘the most remarkable Trinity medical graduate of this period.’ He would later become one of the most famous anatomists of his day. Following study in London with the renowned anatomist William Hunter, Clossy returned to Dublin and took up Stephens’ invitation to study morbid anatomy. He did so from 1752 to 1756 and this sojourn was to prove an immensely fruitful period for him: he would graduate as MD from TCD in 1755 and use his experience at Dr Steevens’ as the foundation for some of his most influential later works.

Clossy’s decision to emigrate to New York in 1763 was a fateful one: he was initially employed as professor of natural philosophy at King’s College (now Columbia University) before being appointed as the first Professor of Anatomy at the same College, a position which made him, as Saffron (1974) recounts, ‘the first college professor of a medical subject in North America’. He therefore played an instrumental role in setting up New York’s first medical school. By the late 1780s failing health and the American war of independence forced him to travel back to England initially, and then on to Dublin, where he died on 22 August 1786.

As O’Donnell (2009) notes, Clossy’s seminal Observations on some of the diseases of the parts of the body; chiefly taken from the dissection of morbid bodies, which was printed at London in 1763, ‘represented one of the first systematic studies of pathology in the English language.’ It was the fruits of what Coakley (2014) notes was ‘the first significant clinical research carried out in a Dublin hospital.’ The importance of Clossy’s experience at Dr Steevens’ Hospital runs through the work, where case after case is mentioned. Here, in his Observation II ‘Of the Head’, Clossy describes the successful treatment of a head wound at Dr Steevens’ Hospital:

Lethargy from Extravasation on Dura Mater.

In April 1752, was brought to Steevens’s a man about forty. Eighteen days before he was thrown by a horse against a wall that struck him oblique on the left Parietal Bone. The Integuments being lightly contused, he was somewhere dressed superficially, and thought to be secure. The seventeenth day from the accident, the day before he came to the hospital, he grew drowsy, and a general resolution of the whole system of the Muscles succeeded. The eighteenth day he slept profoundly, and snored without sense or voluntary motion; the Integuments being raised, no fracture appeared. It was determined however by the Surgeons to trepan him; which being accordingly done, as soon as the piece in the crown of the Trephine was removed, and even before, the matter flowed out, and continued to discharge from between the Dura Mater and Skull. In the evening he awaked, and the matter being all discharged in a few days, he recovered both his understanding and motion.’

Unfortunately, as Clossy’s subsequent cases histories make clear, not all patients were as lucky as this un-named forty year old. In most cases Clossy presents not only the clinical presentation of the case but also the post-mortem findings after which follow Clossy’s  observations on the case.